A prologue note for the parents and others who are charged with guiding the young:
Do not think that you have done enough, elders, to push your children by saying that the answer to life is to win Wimbledon or to go up to Hav-vad or to Yah–ale or, with Mother’s familial permission, King’s College, now Old Blue, what the Americans, in their youthful exuberance, insist upon calling Columbia, or to take down a rowing blue from Jesus College?
Those are not the answers the young need.
In fact, the young, and many of the elders, do not need answers at all, they need instead a question—one question–they need, instead of being hectored to take down rowing blue, that you ask them an eternal question—every day, on day unceasing, even as, elders, we ask ourselves that very same eternal question:
Where does this name of mine belong—upon just what canvas??
~~~

Young medical student Philip Carey, inexplicably infatuated, nay, nay, my dears, bound hopelessly, to a conniving tea room girl, Mildred Rodgers, throws away his entire future as he is unable to escape her, at the very least, socially suspect, blandishments.

Upon what canvas does your name belong?

Here then commences the film version from 1934, starring Leslie Howard, as protagonist, Philip Carey.  Philip is at Paris, studying art.  This night, he buys his teacher a meal and asks the old man back home to look at his work and to give him a straight-forward assessment.  The old man agrees and for a rather long time reviews the paintings set out for him.  This then ensues:

Have you any money?

Then I must tell you—there is no Talent here.

I see only industry and intelligence.

You will never be anything but mediocre.

It is a cruel thing to discover one’s mediocrity only at a late date, believe me, I know.

Do you see this name on this picture—PHILIP CAREY–it does not belong on this canvas?

Go out and find upon what canvas your name belongs.

Ensues then the bondage of Philip Carey and his search for his true canvas.  It is a torturous journey, but in the end, Philip Carey finds happiness and love and freedom from the bonds that tie all of us one to the other without our even wanting it.  Without even knowing it.  Freed because Philip looked in the glass and asked the eternal question of life—upon what canvas does my name belong?

When you look in the glass in the morning, to shave with a razor blade or to brush your hair, what do you ask yourself?  Do you ever ask the question—upon what canvas does my name belong?  You ought to.  We all ought to ask that of ourselves every morning.

Our children and, we ourselves, do not need answers—do not search for answers—ask instead a question—search instead a question–a question only you can answer—a question everyone alone must answer for himself:  WHERE, upon what canvas, does my name belong?

Willy Maugham was the best story-teller of my near lifetime.  He wrote one legitimately great novel, Cakes and Ale, another of high top-shelf, The Moon and Sixpence and an absolutely remarkable corpus of stories of every conceivable sort—all of them better stories than anyone else’s of his day to this.  Nobody could tell a good story as well as Willy. Nobody.

His headstone novel, Of Human Bondage, is, indubitably, the best of the last great era of full-length novels.  That great, weighty, novel was a bit much even for Willy’s day, and, in fact, toward the end of his life, he remarked that  it was an antique work in a world moving faster and faster, in which none had the time, leisure or, far worse yet, the interest in, reading so long a story.

Leslie Howard, the greatest force and fixture, bar no one—ever– in motion pictures, distilled down Maugham’s encyclopedic-sized masterpiece into a remarkable hour-long movie, opposite Bette Davis, a girl he loved using in his pictures.  They just clicked together somehow.

Oddly, Howard was very often cast as a stuffed shirt or a milquetoast–likely because he was English and, while tall and lean, was not rugged or powerfully built like Clark Gable and other leading men of his day–see Howard’s Ashley Wilkes in Gone with the Wind.

Joan Blondell had somewhat different memories of Howard: “Leslie Howard was a darling flirt. He’d be caressing your eyes and have his hand on someone else’s leg at the same time. He was adorable. He was a little devil and just wanted his hands on every woman around. He just loved ladies.”  Of which, Howard said himself : “I do not chase after girls, but there have been times I couldn’t quite get away.”

Tinsel Town gossip aside, for now anyway, here is a bit about the novel, the movie and the eternal question—WHERE, on what canvas,  does my name belong?  Abandoning artistic ambitions at Paris, sensitive and club-footed Philip Carey enrolls in medical school and falls in love with a waitress, Mildred Rogers. She rejects him, runs off with a salesman and returns unmarried and pregnant. Philip gets her an apartment and they become engaged. Mildred runs off with another medical student. Philip takes her back again when she returns with her baby. She wrecks his apartment and burns the securities he needs to pay tuition. He gets a job as a salesman, has surgery on his foot, receives an inheritance, and returns to school where he learns Mildred is dying.

Finally, Philip finds comfort in a family that adopts him, as he has none left of his own, and love in the arms of a very sweet young girl, who he must wait to marry until she is of age, called Sally.  In short order we find him a newly-minted doctor with Sally on his arm at picture’s end, bound no more by obsessions he cannot understand and he also finds where his elusive name belongs—and discovers—happiness—on the canvas of medicine after all.

The 1934 adaptation of Willy Maugham’s Of Human Bondage cannot but inspire.  The opening minutes alone posit to us the central question, truly the only question we must ask ourselves—WHERE, upon what canvas, does my name belong?  Many never find out.  Still many more never even think to ask the question.  A dreadful shame, that.

Dear reader—examine yourself—ask—on what artifice, upon what canvas, in what trade or profession does my name belong?  If you discover the answer, you will be free, you will be happy, you will be contented you will be pleasing to God Jesus and, perhaps best of all, what is now called work you will long for with a happy passion and spend every day at your work smiling.  You will have put your name to the canvas God intended for you.

God gives all of us a special gift.  We must search out for ourselves alone what that gift is.  Mom and Dad and teachers and priests can act as guides, but this search is, at the end, ours alone.  This search for our intended canvas, where our name belongs.

I made my discovery as to where my name belongs at age full 60 years.  That despite knowing, intuitively all along, the answer.  Age does not alter the need to search out the answer to the eternal question.  A deliberate search—sometimes lifelong– is required.

We ask parents, educators, public figures, priests, to encourage the people to go on that search for the answer to:  Where, upon what canvas, does my name belong?

If you find out where your name belongs, you will never work another day in your life—your work will be an unrivaled joy and, most of all, pleasing to God.

As it was God who, into each and every one of His Children, put the seed corn that, when it grows, presents us all the opportunity for all of us to work out our own answers to the eternal question—WHERE does my name belong?  Upon what canvas?

Search out that answer—it is in you—if you were, as I am, you will realize, in retrospect, that the answer was right in front of you all along.  You will be amazed, hypnotized by the simplicity of it all.  When you find the answer, your life will be fulfilled, happy, rapturous.

God bless us and direct us.  Teachers, preachers, public figures, parents—your first role is to find your own path—your own answer to the endless question—where does my name belong—upon just which canvas?  When you have done that for yourself—do that likewise for others—instruct the children—guide them—do not lose your way or let the children lose their way.

Do not think that you have done enough, elders, to push your children by saying that the answer to life is to win Wimbledon or to go up to Hav-ad or to Yah–ale or, with Mother’s familial permission, King’s College, now Old Blue, or to take down a rowing blue from Jesus College.

Those are not the answers the young need. In fact, the young, and many of the elders do not need answers, they need instead a question—one question–they need, instead of being hectored to take down rowing blue, that you ask them an eternal question—every day, on day unceasing, even as, elders, we ask ourselves that very same eternal question:

Where does that name of mine belong—upon just what canvas?? 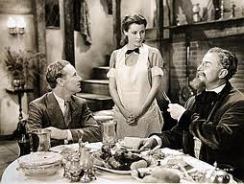 Philip’s woes slowly mending, he is adopted by a kindly old gentleman, as Philip has no family of his own left. The gentleman has a pretty daughter, Sally, who is yet too young to wed but who is nonetheless instantly smitten by the young medical man.

Finally free of the bondage of Mildred Rodgers and his club foot corrected, the now freshly-minted, Dr. Philip Carey, and his young Sally walk off together, to wed.  Suddenly, Philip realizes that he has finally found the canvas that fits his name, PHILIP CAREY, MD, and that canvas is medicine after all!!

And now, as a gift from Mr. Willy Maugham who wrote the book, Mr. Leslie Howard who adapted that monumental book so wonderfully to the screen in 1934, and to Miss Bette Davis for her remarkable acting opposite Howard in the film—now, dears, your most just desserts–our movie in full length—Leslie Howard and Bette Davis in Willy Maugham’s masterwork–Of Human Bondage…

2 thoughts on “Upon what canvas does my name belong?”