Outlawing a type of insecticides is not a panacea.  AP Photo/Ben Margot

As we’ve written before, the mysterious mass die-off of honey bees that pollinate $30 billion worth of crops in the US has so decimated America’s apis mellifera population that one bad winter could leave fields fallow. Now, a new study has pinpointed some of the probable causes of bee deaths and the rather scary results show that averting beemageddon will be much more difficult than previously thought.

Scientists had struggled to find the trigger for so-called Colony Collapse Disorder (CCD) that has wiped out an estimated 10 million beehives, worth $2 billion, over the past six years. Suspects have included pesticides, disease-bearing parasites and poor nutrition. But in a first-of-its-kind study published today in the journal PLOS ONE, scientists at the University of Maryland and the US Department of Agriculture have identified a witch’s brew of pesticides and fungicides contaminating pollen that bees collect to feed their hives. The findings break new ground on why large numbers of bees are dying though they do not identify the specific cause of CCD, where an entire beehive dies at once.

When researchers collected pollen from hives on the east coast pollinating cranberry, watermelon and other crops and fed it to healthy bees, those bees showed a significant decline in their ability to resist infection by a parasite called Nosema ceranae. The parasite has been implicated in Colony Collapse Disorder though scientists took pains to point out that their findings do not directly link the pesticides to CCD. The pollen was contaminated on average with nine different pesticides and fungicides though scientists discovered 21 agricultural chemicals in one sample. Scientists identified eight ag chemicals associated with increased risk of infection by the parasite.

Most disturbing, bees that ate pollen contaminated with fungicides were three times as likely to be infected by the parasite. Widely used, fungicides had been thought to be harmless for bees as they’re designed to kill fungus, not insects, on crops like apples.

“There’s growing evidence that fungicides may be affecting the bees on their own and I think what it highlights is a need to reassess how we label these agricultural chemicals,” Dennis vanEngelsdorp, the study’s lead author, told Quartz.

Labels on pesticides warn farmers not to spray when pollinating bees are in the vicinity but such precautions have not applied to fungicides.

Bee populations are so low in the US that it now takes 60% of the country’s surviving colonies just to pollinate one California crop, almonds. And that’s not just a west coast problem—California supplies 80% of the world’s almonds, a market worth $4 billion.

In recent years, a class of chemicals called neonicotinoids has been linked to bee deaths and in April regulators banned the use of the pesticide for two years in Europe where bee populations have also plummeted. But vanEngelsdorp, an assistant research scientist at the University of Maryland, says the new study shows that the interaction of multiple pesticides is affecting bee health.

“The pesticide issue in itself is much more complex than we have led to be believe,” he says. “It’s a lot more complicated than just one product, which means of course the solution does not lie in just banning one class of product.”

The study found another complication in efforts to save the bees: US honey bees, which are descendants of European bees, do not bring home pollen from native North American crops but collect bee chow from nearby weeds and wildflowers. That pollen, however, was also contaminated with pesticides even though those plants were not the target of spraying.

“It’s not clear whether the pesticides are drifting over to those plants but we need take a new look at agricultural spraying practices,” says vanEngelsdorp. 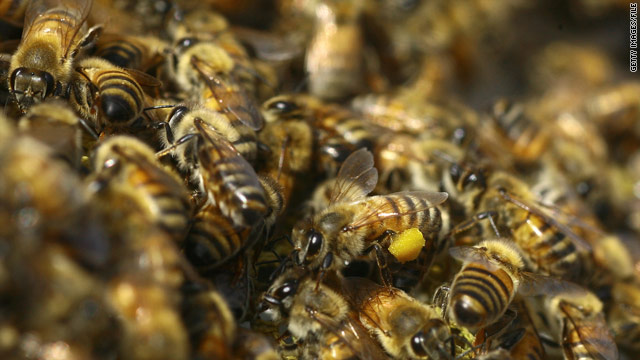 Walter Brennan – To Have And Have Not