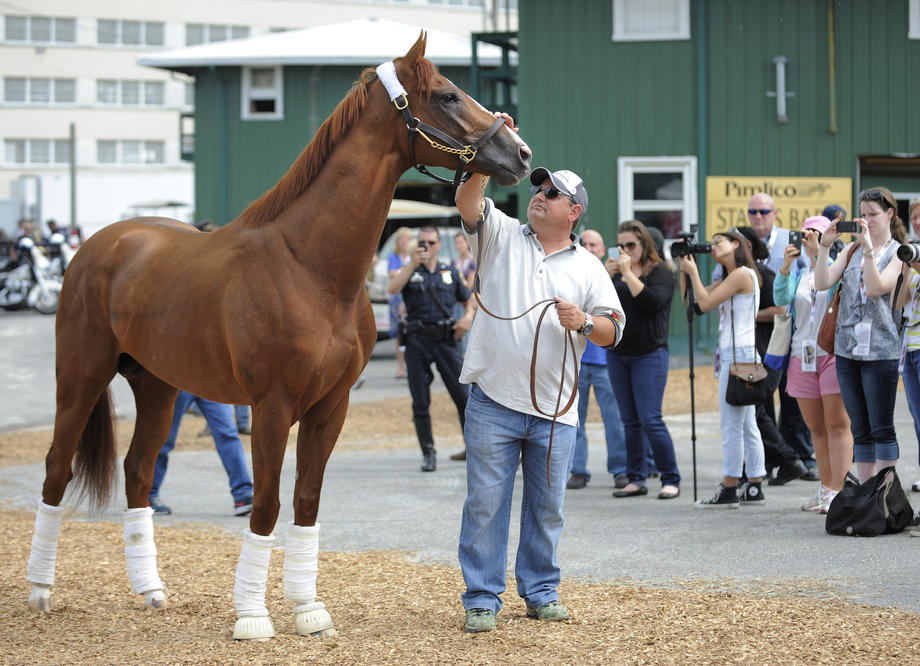 CALIFORNIA CHROME NOW CALMLY ANTICIPATES HIS VICTORY OVER SOCIAL INCLUSION IN THE 139TH PREAKNESS STAKES AT PIMLICO, 17TH MAY, 2014. 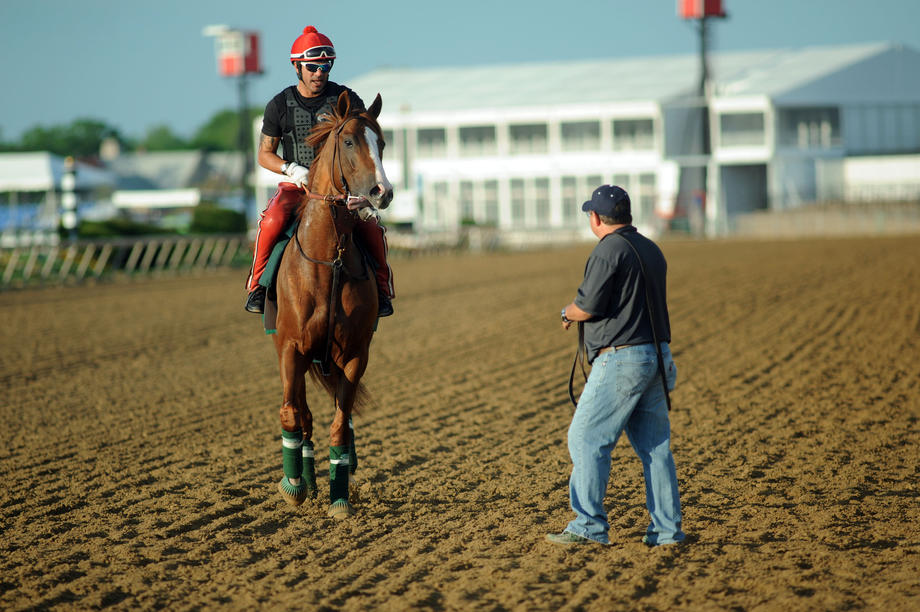 Kentucky Derby winner California Chrome arrives at Pimlico as he is lead off the trailer by assistant trainer Alan Sherman. 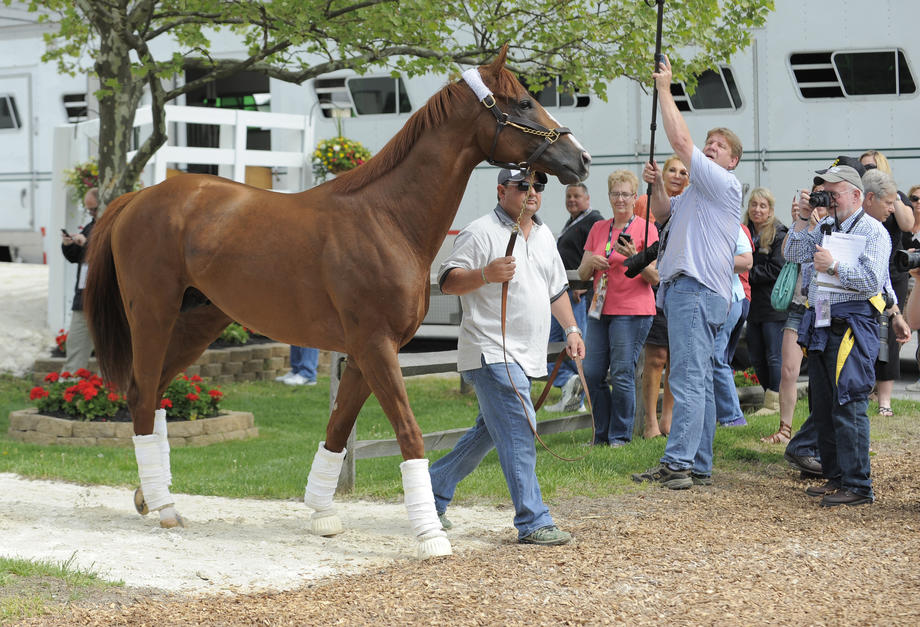 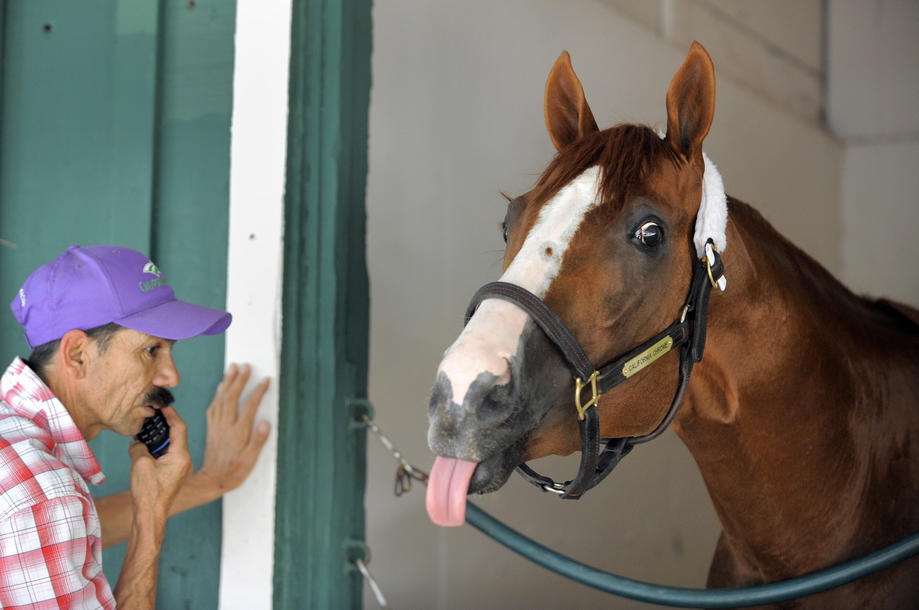 An endorsement from Andrew Beyer. We in the clubhouse think that, despite Andy Beyer’s penchant to hobble and destroy any and all horses he endorses, California Chrome is simply too good for even Beyer to beat.

So, hang Beyer.
~~
Bet California Chrome even if Andy plants the kiss of death of him.
~~
AND:
~~
If Andy doesn’t kiss California Chrome:
~~
Bet him even more:
~~
Gluttonously!!
~~
You and I don’t want to become known in the town as idle gossips and greedy little children, but we must ask:
~~
How do we make a decent return on California Chrome in the Preakness?
~~
More than likely, he will pay no better than even money:
~~
Which is to say:
~~
Double your investment dollar.
~~
If that much.
~~
While our club house typically shies from what is called exotic wagering, upon the very sensible supposition that to pick one horse in a race is traumatic enough.
~~
That said, as we assume California Chrome to be the winner, we are merely tasked to pick the runner-up to couple with him and, in doing so:
~~
Exacta betting suggests itself to us as a way to line our pockets more handsomely than simply betting California Chrome straight to win.
~~
An exacta compels the bettor to pick the first 2 finishers in a race in precise order of their finish.
~~
Sometimes, when the race seems fairly even between 2 horses, bettors will flip the exacta in a box, for example, 1-2, 2-1.
~~
Trouble there is that one dissipates one’s capital as only one combination, if that, will prove out and one must buy 2 tickets to play the flip box.
~~
As California Chrome will win, one needn’t dissipate one’s capital reserves by flipping him in an exacta box with the second finisher.
~~
Never dissipate your capital reserves.
~~
Never, never.
~~
Ever, ever.
~~
So, dear brethren, who is the elusive second place horse for us to marry up in the Preakness with California Chrome in first place?
~~
Well then, you’ve been polite, so here he is:
~~
The clubhouse has now chosen our one-way exacta bet, with California Chrome in the top slot:
~~
AND:…. 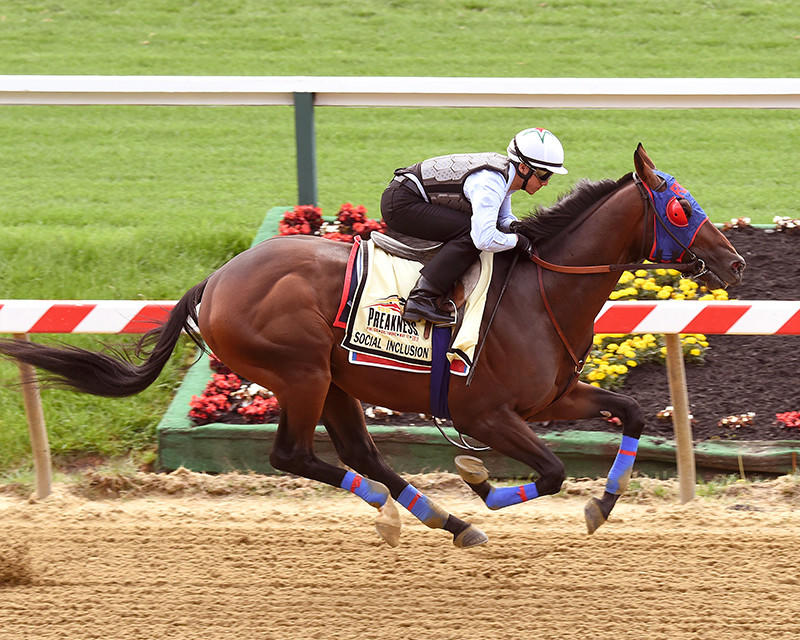 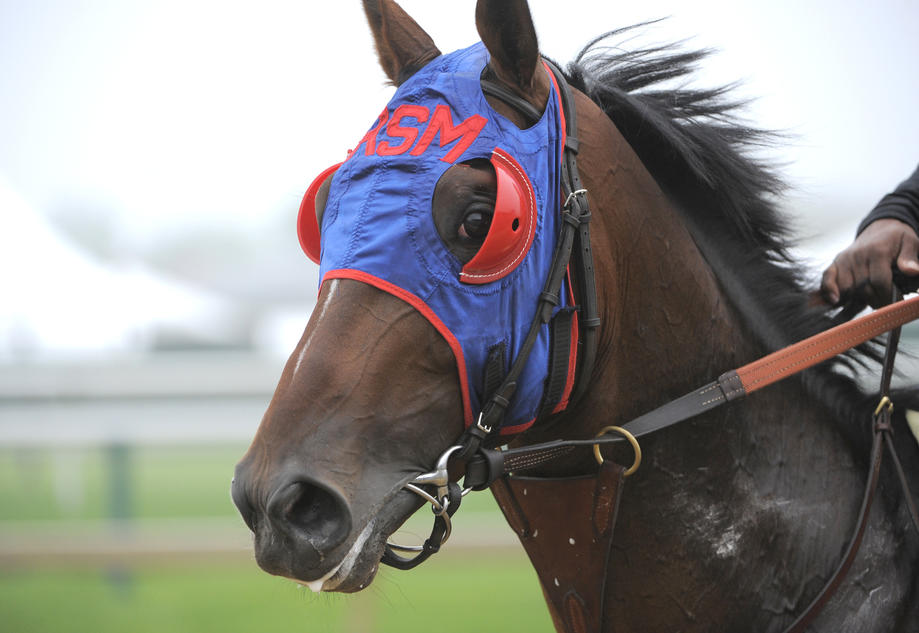