“It is fitting that on Labor Day, we meet beside the waters of New York harbor, with the eyes of Miss Liberty on our gathering and in the words of the poet whose lines are inscribed at her feet, “The air bridged harbor that twin cities frame.”

Through this “Golden Door,” under the gaze of that “Mother of Exiles,” have come millions of men and women, who first stepped foot on American soil right there, on Ellis Island, so close to the Statue of Liberty.

These families came here to work.  They came to build. Others came to America in different ways, from other lands, under different, often harrowing conditions, but this place symbolizes what they all managed to build, no matter where they came from or how they came or how much they suffered.

They helped to build that magnificent city across the river.  They spread across the land building other cities and towns and incredibly productive farms.

They came to make America work.  They didn’t ask what this country could do for them but what they could do to make this refuge the greatest home of freedom in history.

They brought with them courage, ambition and the values of family, neighborhood, work, peace and freedom. They came from different lands but they shared the same values, the same dream.

Today a President of the United States would have us believe that dream is over or at least in need of change.

Jimmy Carter’s Administration tells us that the descendants of those who sacrificed to start again in this land of freedom may have to abandon the dream that drew their ancestors to a new life in a new land.

The Carter record is a litany of despair, of broken promises, of sacred trusts abandoned and forgotten.

Eight million out of work.  Inflation running at 18 percent in the first quarter of 1980.  Black unemployment at about 14 percent, higher than any single year since the government began keeping separate statistics.  Four straight major deficits run up by Carter and his friends in Congress.  The highest interest rates since the Civil War–reaching at times close to 20 percent–lately down to more than 11 percent but now going up again–productivity falling for six straight quarters among the most productive people in history.

Through his inflation he has raised taxes on the American people by 30 percent–while their real income has risen only 20 percent.  He promised he would not increase taxes for the low and middle-income people–the workers of America.  Then he imposed on American families the largest single tax increase in history.

His answer to all of this misery?      He tries to tell us that we are “only” in a recession, not a depression, as if definitions—words–relieve our suffering.

I have talked with unemployed workers all across this country.  I have heard their views on what Jimmy Carter has done to them and their families.

Let Mr. Carter go to their homes, look their children in the eye and argue with them that in is “only” a recession that put dad or mom out of work.

Let him go to the unemployment lines and lecture those workers who have been betrayed on what is the proper definition for their widespread economic misery.

Human tragedy, human misery, the crushing of the human spirit.  They do not need defining–they need action.

And it is action, in the form of jobs, lower taxes, and an expanded economy that — as President — I intend to provide.

Call this human tragedy whatever you want.  Whatever it is, it is Jimmy Carter’s.  He caused it.  He tolerates it.  And he is going to answer to the American people for it.

Last week, more than three years after be became President, he finally came up with what he calls a new economic program.  It is his 5th new economic program in 3 ½ years.  He talks as if someone else has been in charge these past few years.  With two months to go until the election he rides to the rescue now with a crazy-quilt of obvious election-year promises which he’ll ask Congress for–next year.  After three years of neglect, the misery of unemployment, inflation, high taxes, dwindling earning power and inability to save–after all this, American workers have now been discovered by this administration.

Well it won’t work.  It is cynical.  It is political.  And it is too late.  The damage is done and every American family knows who did it.

In 1976 he said he would bring unemployment and inflation down to 3 percent.

Who can believe him?  Unemployment is now around 8 percent, inflation is 12 ½.

And most of us have begun to realize that so long as Carter policies are in effect, the next four years will be as dark as the last four.

But here, beside the torch that many times before in our nation’s history has cast a golden light in times of gloom, I pledge to you I’ll bring a new message of hope to all America.

I look forward to meeting Mr. Carter in debate, confronting him with the whole sorry record of his Administration–the record he prefers not to mention.  If he ever finally agrees to the kind of first debate the American people want–which I’m beginning to doubt–he’ll answer to them and to me.

This country needs a new administration, with a renewed dedication to the dream of America–an administration that will give that dream new life and make America great again!

Restoring and revitalizing that dream will take bold action.

On this day, dedicated to American working men and women, may I tell you the vision I have of a new administration and of a new Congress, filled with new members dedicated to the values we honor today?

Beginning in January of 1981, American workers will once again be heeded.  Their needs and values will be acted upon in Washington.  I will consult with representatives of organized labor on those matters concerning the welfare of the working people of this nation.

I happen to be the only president of a union ever to be a candidate for President of the United States.

As president of my union — the Screen Actors Guild — I spent many hours with the late George Meany, whose love of this country and whose belief in a strong defense against all totalitarians is one of labor’s greatest legacies.  One year ago today on Labor Day George Meany told the American people:

“As American workers and their families return from their summer vacations they face growing unemployment and inflation, a climate of economic anxiety and uncertainty.”

Well I pledge to you in his memory that the voice of the American worker will once again be heeded in Washington and that the climate of fear that he spoke of will no longer threaten workers and their families.

That’s no answer.  We can have a bigger pie with bigger slices for everyone.  I believe that together you and I can bake that bigger pie.  We can make that dream that brought so many of us or our parents and grandparents to this land live once more.

Let us work to protect the human right to acquire and own a home, and make sure that that right is extended to as many Americans as possible.  A home is part of that dream.

I want to work in Washington to roll back the crushing burden of taxation that limits investment, production, and the generation of real wealth for our people.  A job, and savings, and hope for our children is part of that dream.

I want to help Americans of every race, creed and heritage keep and build that sense of community which is at the heart of America, for a decent neighborhood is part of that dream.

We will work to strengthen the small business sector which creates most of the new jobs we need for our people.  Small business needs relief from government paperwork, relief from over-regulation, relief from a  host of governmentally-created problems that defeat the effort of creative men and women.  A chance to invest, build and produce new wealth is part of the dream.

But restoring the American dream requires more than restoring a sound, productive economy, vitally important as that is.  It requires a return to spiritual and moral values, values so deeply held by those who came here to build a new life.  We need to restore those values in our daily life, in our neighborhoods and in our government’s dealings with the other nations of the world.

These are the values inspiring those brave workers in Poland. The values that have inspired other dissidents under Communist domination.  They remind us that where free unions and collective bargaining are forbidden, freedom is lost.  They remind us that freedom is never more than one generation away from extinction.  You and I must protect and preserve freedom here or it will not be passed on to our children.  Today the workers in Poland are showing a new generation not how high is the price of freedom but how much it is worth that price.

I want more than anything I’ve ever wanted, to have an administration that will, through its actions, at home and in the international arena, let millions of people know that Miss Liberty still “Lifts her lamp beside the golden door.”  Through our international broadcasting stations — the Voice of America, Radio Free Europe, and the others — let us send, loud and clear, the message that this generation of Americans intends to keep that lamp shining; that this dream, this last best hope of man on earth, this nation under God, shall not perish from the earth.  We will instead carry on the building of an American economy that once again holds forth real opportunity for all, we shall continue to be a symbol of freedom and guardian of the eternal values that so inspired those who came to this port of entry.

Let us pledge to each other, with this Great Lady looking on, that we can, and so help us God, we will make America great again.”

On this day, at this very hour, word reaches us that two NYPD Officers, Rafael Ramos and Wenjian Liu were brutally, callously and with deliberation ambushed and murdered outside the Golden Door.

We pray for the families of the slain officers and for all policemen at this dreadful moment when, at Christmastime, 2014: 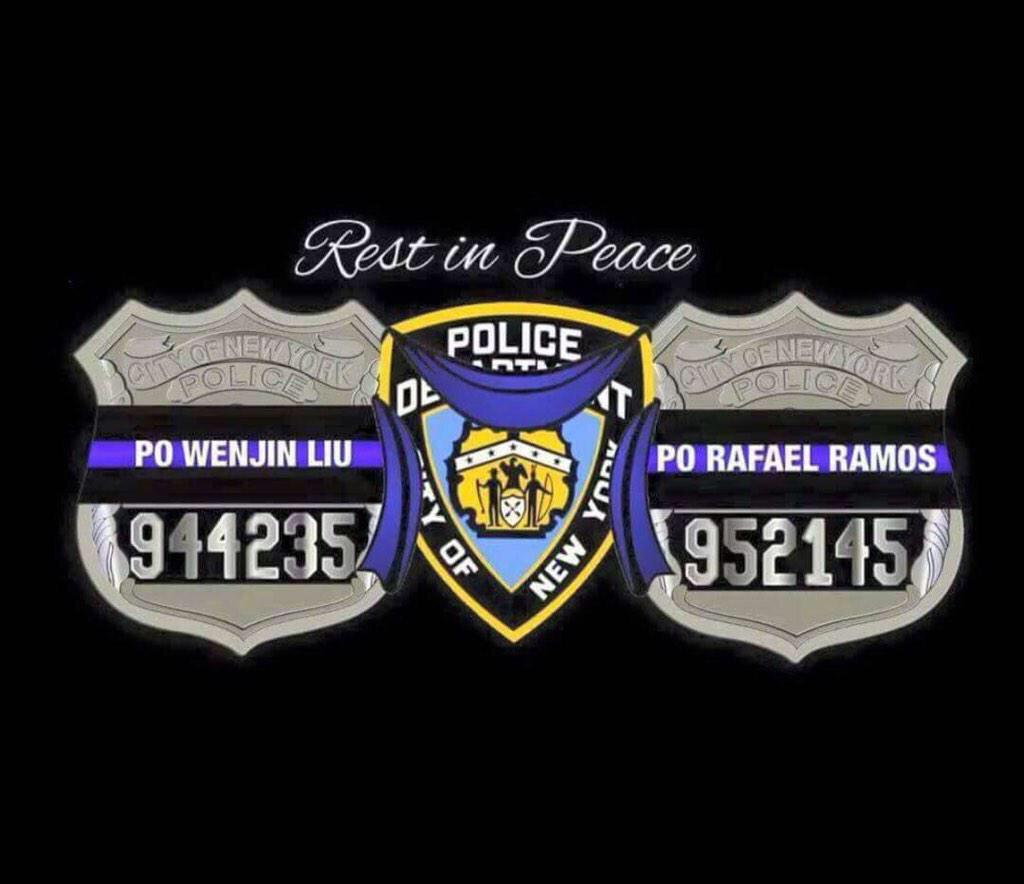 When the Americans kill their own policemen, there stands no longer any civilized statue of Miss Liberty to point to.