Jaguar’s epic 3.4 liter, DOHC inline-six powered D-Types were originally built for competitive racing– with a few also falling into the hands of privileged private owners. But by 1958, the D-Type had become obsolete– new racing mandates now called for smaller 3.0-liter engines, which would hurt the D-Type’s performance on the track. Ferrari had proven themselves to be the masters of small-displacement, high-performance racing, particularly with their iconic Testa Rossa that could handily eat the 3.0 liter D-type’s lunch. Jaguar found itself needing to unload 25 of the 3.4 liter D-Types.

Jaguar execs decided to convert the old D-Types to street legal sports cars and sell them to the public as limited-edition GTs. The Jaguar was subjected to a series of street-legal retrofits, including– a full-width windshield, and a bare-bones top and luggage rack added to the rear deck replaced the original racing dorsal fin. Removable fixed-pane side curtains were then mounted to the Jaguar’s doors. A vestigial exhaust system was devised by engineers– complete with a guard to prevent laymen from burning themselves on the Jag’s exposed, aggressive sidepipes. The roadster’s lighting was converted to meet street specs, two nicely-appointed seats were added, a passenger side door and sleek bumpers were tacked-on, and they were ready to roll.  Tragically, 9 of the 25 XK-SS D-Types were destroyed by a fire at the Jaguar factory in 1957, making the remaining 16 all the more special.

One of these iconic roadsters would find its way into the hands of Steve McQueen– who enjoyed an on-and-off love affair with this special Jaguar up until the very end.

Perhaps no other car is more strongly identified with Steve McQueen, aside from the iconic Highland Green Mustang GT from the epic Bullitt, than his 1957 Jaguar D-type XK-SS.  He had his buddy Von Dutch custom craft a locking glovebox for the Jag to keep those Persols from flying out when he punched the gas.

Steve McQueen first saw his Jaguar XK-SS parked on a studio lot on Sunset Boulevard, back when it originally belonged to Bill Leyden (a local LA radio/television personality).  McQueen bought the Jag from him for $5,000 in 1958– though some historians claim the purchase price was $4,000. Wife Neile recalled, “I know exactly how much we paid for it– I signed the check.” Once, McQueen was pulled over for speeding with Neile, 6 months pregnant at the time, sitting beside him.  He lied and told the cop that she was in labor.  They got an official police escort to the hospital, where nurses were waiting to rush Neile in. After the police left, McQueen told the staff that it was just ‘false labor’, and off they went. He was later quoted as saying, “Neile was pissed. She didn’t speak to me for the rest of the day. But, by God, it worked. I didn’t get the ticket!”

Steve McQueen tinkering with his ’57 Jaguar XK-SS on the set of  ‘Wanted: Dead or Alive.’ McQueen’s Jag was originally painted white with a red interior– he would repaint the XK-SS proper British Racing Green, and had SoCal drag racer/hot-rodder/upholsterer Tony Nancy redo the entire interior in black leather.

Under the hood of the Jaguar XK-SS– 3.4-liter, double-overhead-cam inline six-cylinder engine, topped of with a six-pack of side-draft Weber carburetors. This same engine powered the original XK-120, and all Jaguars made through the 1950s & 1960s. This little dry-sump honey could easily produce 250-275 horsepower– giving this cat an impressive power-to-weight ratio of 1 hp per 8 lbs, and 0-60 mph in 5 seconds, which was insane for a street car back in those days.

May, 1963– Steve McQueen tooling around LA in his Jaguar XK-SS. — Photograph by © John Dominis/ Time & Life Pictures/Getty Images. In 1984, McQueeen’s XK-SS was sold at auction to one-time neighbor, Richard Freshman, who knew Steve from his early Hollywood Hills days– reported for $148,000. Freshman then commissioned Lynx in England to carry out a respectful restoration of the car– insisting that all of McQueen’s own modifications (the Tony Nancy leather job and Von Dutch’s locking glovebox) remain fully intact, and that the Jaguar be road-safe and ready for action. Freshman later sold the car to Margie and Robert E. Petersen (patrons of the Petersen Automotive Museum and founders of Motor Trend) in 2000, in keeping with Petersen’s penchant for collecting movie-star cars.

May, 1963– Steve McQueen tooling around LA in his Jaguar XK-SS. — Photograph by © John Dominis/ Time & Life Pictures/Getty Images. McQueen and pals would often take their rides out on Mulholland Drive, in the early morning hours between midnight and 4 am, to quench their need for speed.  McQueen and friends terrorized Mulholland Drive with their high speed runs on-and-off for some 20 years, the XK-SS being his weapon of choice for most of his midnight rides. Petersen Automotive Museum director Dick Messer, an L.A. native and one of the car’s current caretakers, recalls, “I remember him driving this car a lot. People who lived up in the Hollywood Hills would hear the Jag coming and say ‘Yep, there goes McQueen.’ The Jag was his favorite.”

May, 1963– Steve McQueen tooling around LA in his Jaguar XK-SS. — Photograph by © John Dominis/ Time & Life Pictures/Getty Images. Local legend holds that at least one L.A. law-enforcement agency had promised its officers that an “expensive steak dinner” awaited the guy who could nail McQueen and the Jag with a speeding ticket. The tale continues that, while he was spotted often and even pursued a time or two, he was never caught and never written. The steak dinner went unclaimed. Another story refutes the entire affair, alleging that McQueen was so awash in speeding tickets he nearly lost his license. 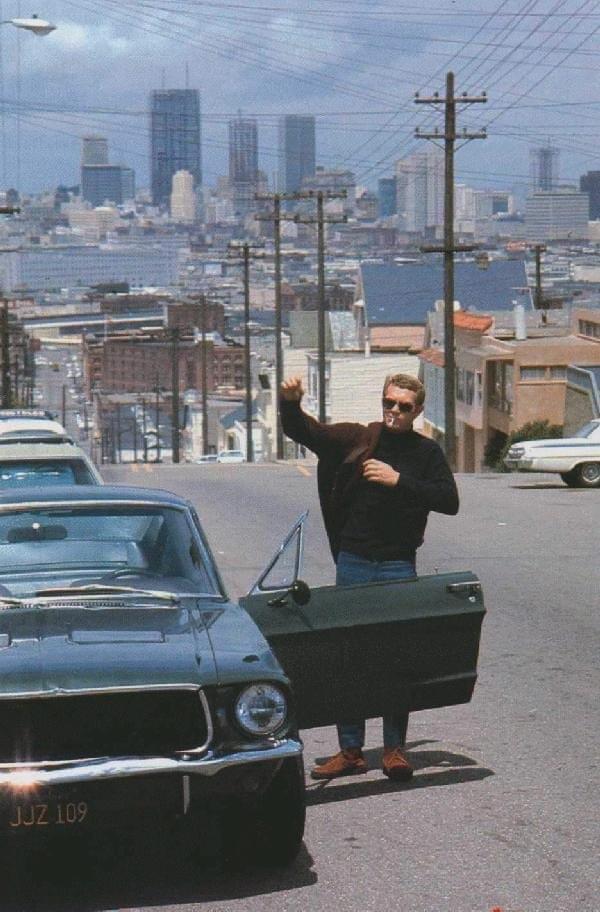 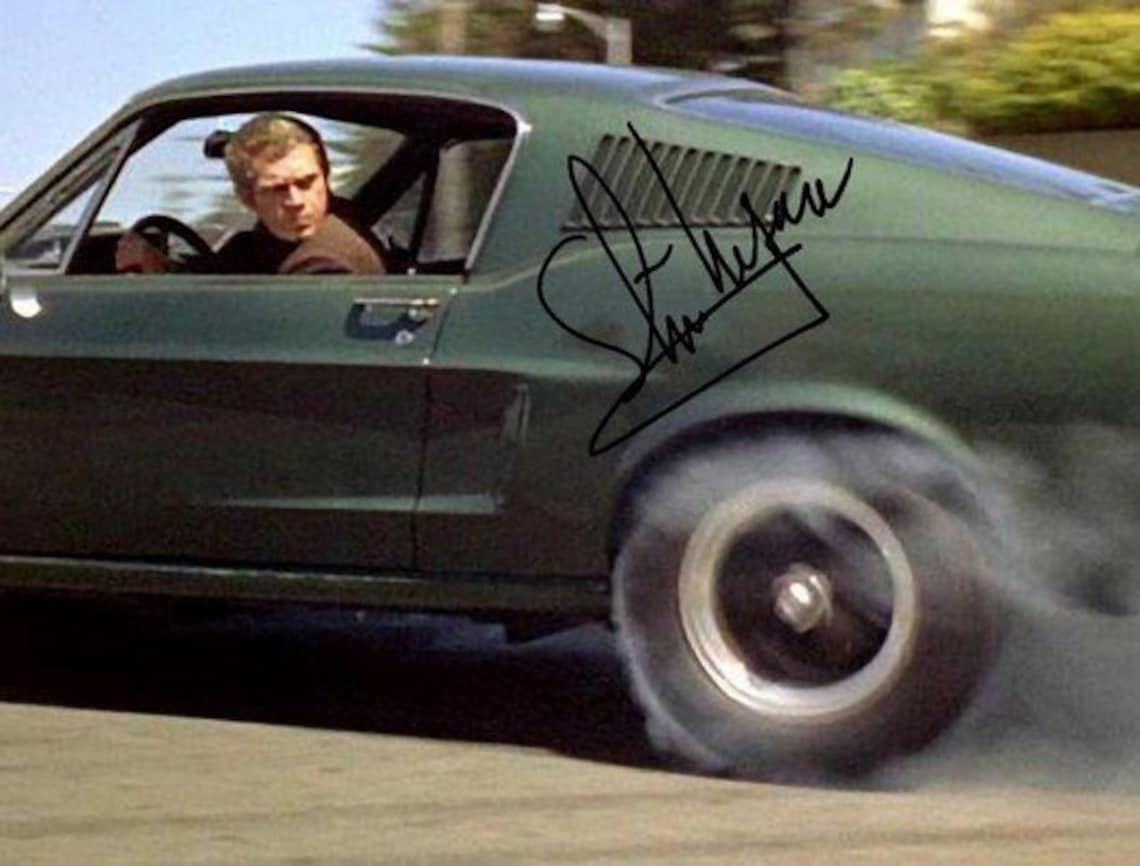