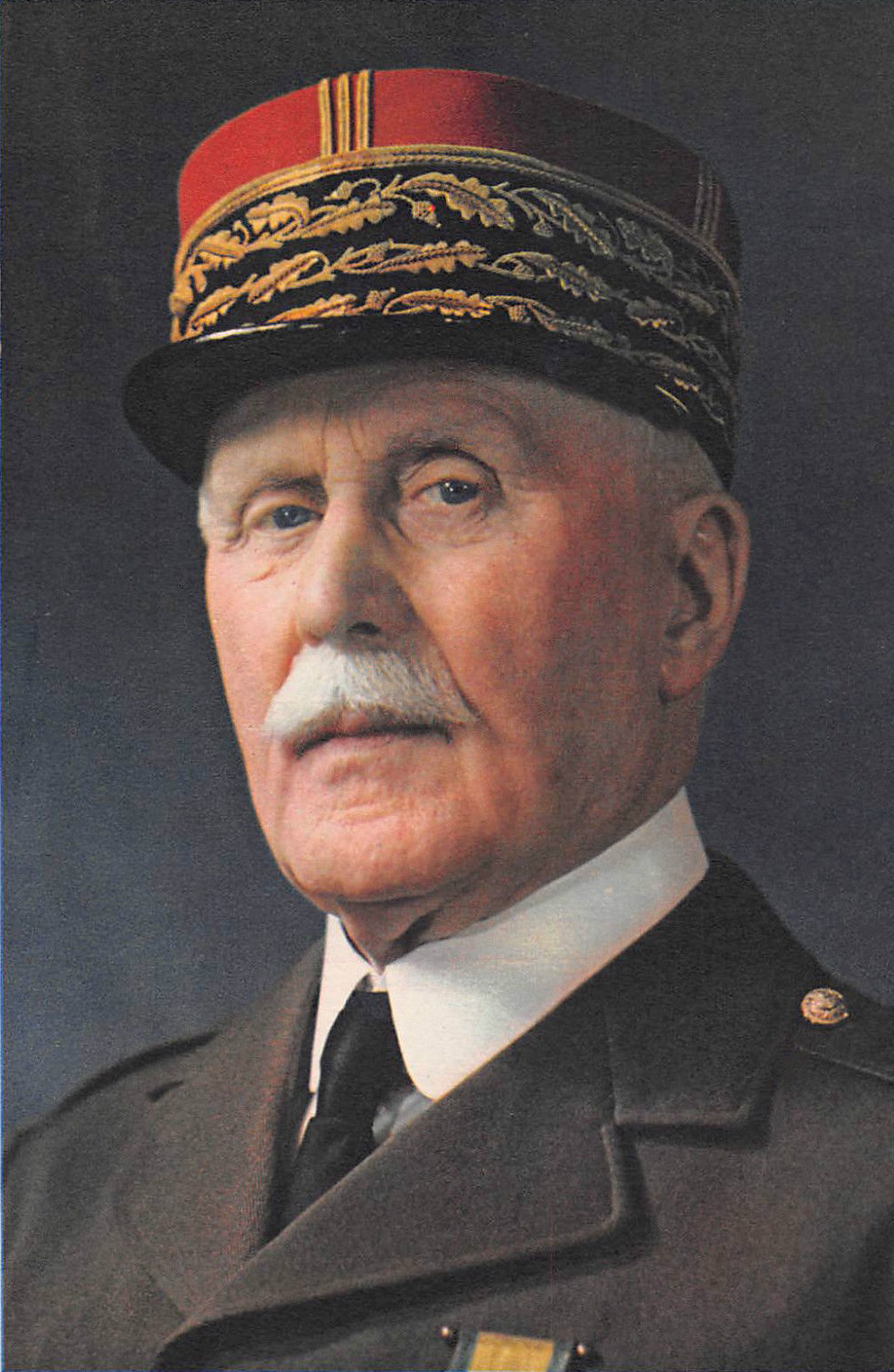 Sex and the stormtroopers: How French women fell for the Nazi invaders during the Second World War 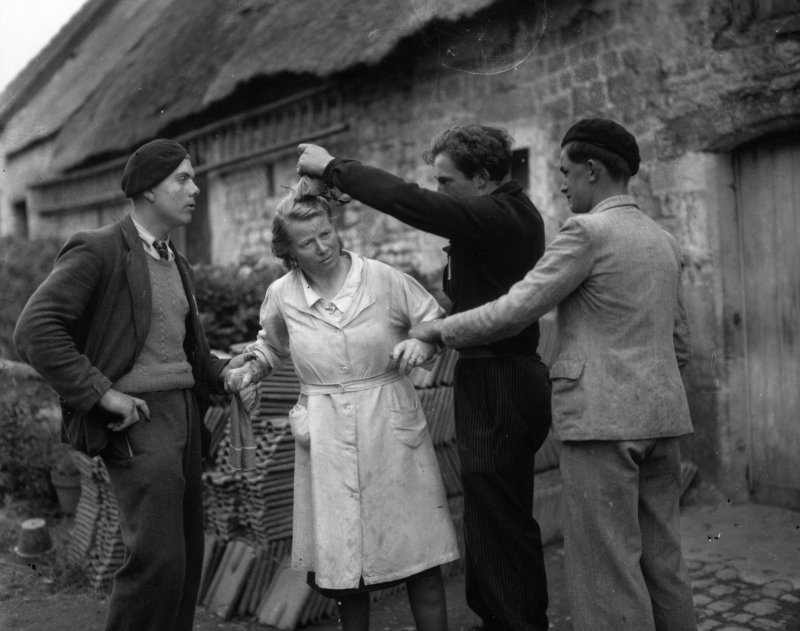 Circa 1945: Two French men restrain a woman while another crops her hair after she has been accused of collaborating with the Germans during the occupation.
Keystone/Getty Images 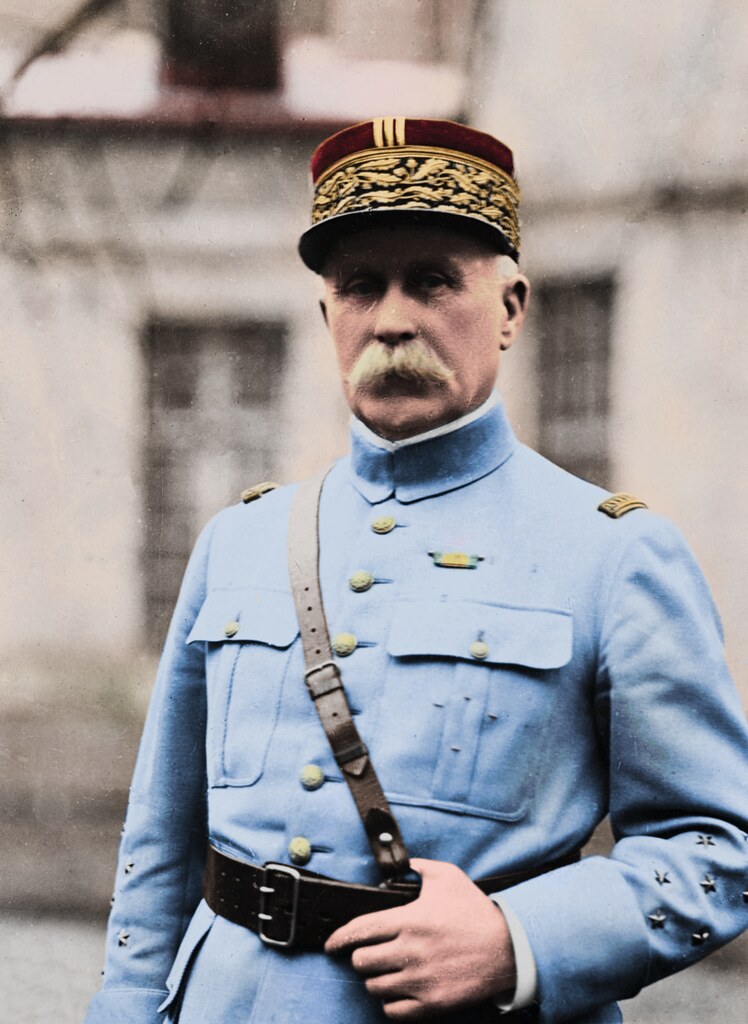 They called it the épuration sauvage, the wild purge, because it was spontaneous and unofficial. But, yes, it was savage, too. In the weeks and months following the D-Day landings of June 6, 1944, Allied troops and the resistance swept across France liberating towns and villages, and unleashing a flood of collective euphoria, relief and hope. And then the punishments began.

The victims were among the most vulnerable members of the community: Women. Accused of “horizontal collaboration” — sleeping with the enemy — they were targeted by vigilantes and publicly humiliated. Their heads were shaved, they were stripped half-naked, smeared with tar, paraded through towns and taunted, stoned, kicked, beaten, spat upon and sometimes even killed.

One photograph from the era shows a woman standing in a village as two men forcibly restrain her wrists; a third man grabs a hank of her blonde hair, his scissors poised to hack it away.

Just as the punished were almost always women, their punishers were usually men, who acted with no legal mandate or court-given authority.

Although some were loyal resistance members, others had themselves dabbled in collaborationist activity and were anxious to cleanse their records before the mob turned on them, too.

About 6,000 people were killed during the épuration sauvage — but the intense, cruel, public ferocity of the movement focused not on serious collaborationist crime.

Instead, it zeroed in on women accused of consorting with the enemy.

Images show women kissing SS officers in bars and cabarets, posing in bikinis on the beach and enjoying strolls under the Eiffel Tower. 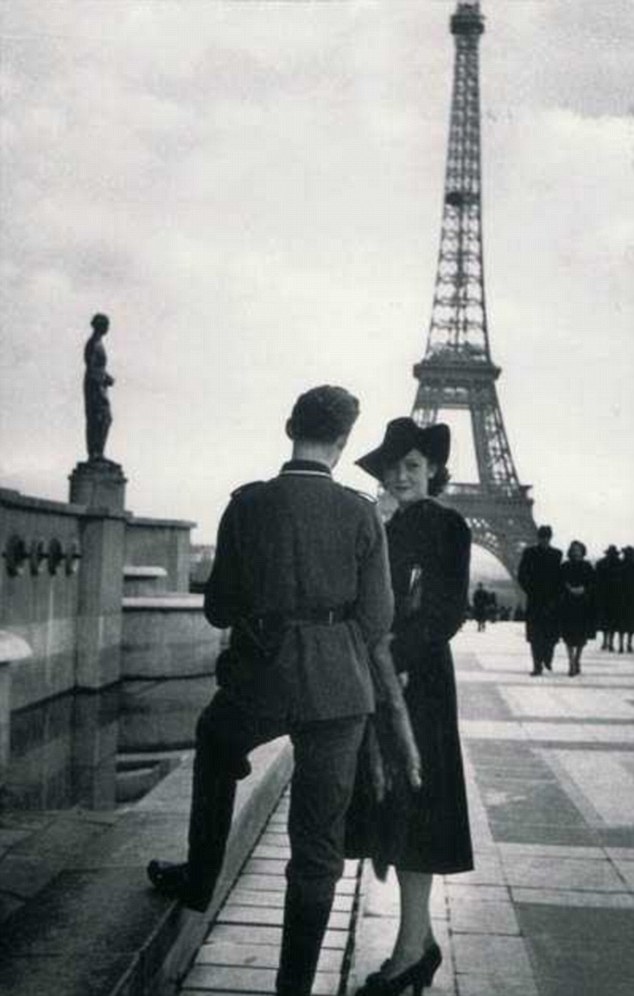 Dangerous liaisons: A French woman poses with a Nazi officer at the Eiffel Tower during the period of German occupation in the Second World War

Despite more than two million Frenchmen being held in prisoner-of-war camps, the birth rate boomed in 1942 with an estimated 200,000 children born to Franco-German couples. Up to 30 per cent of births were illegitimate in some parts of Paris. 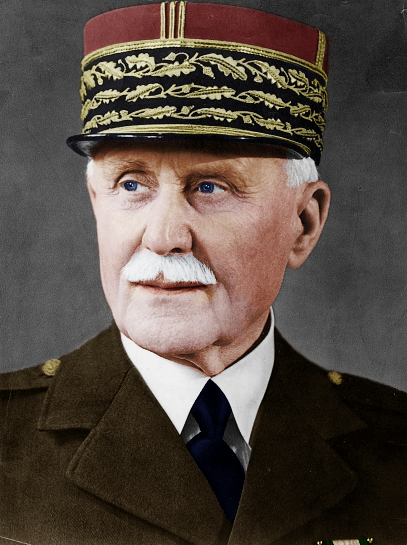 On June 14, 1940, the Hitler army marched into Paris and stayed for four years. Patrick Buisson, director of France’s History Channel, TF1 and an advisor to President Sarkozy, admits that much of what happened during occupation in France has been brushed under the carpet. 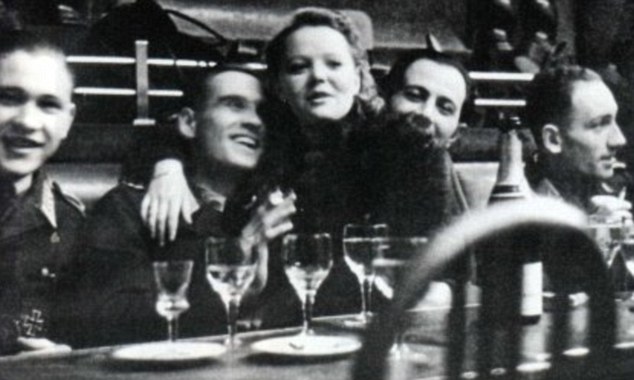 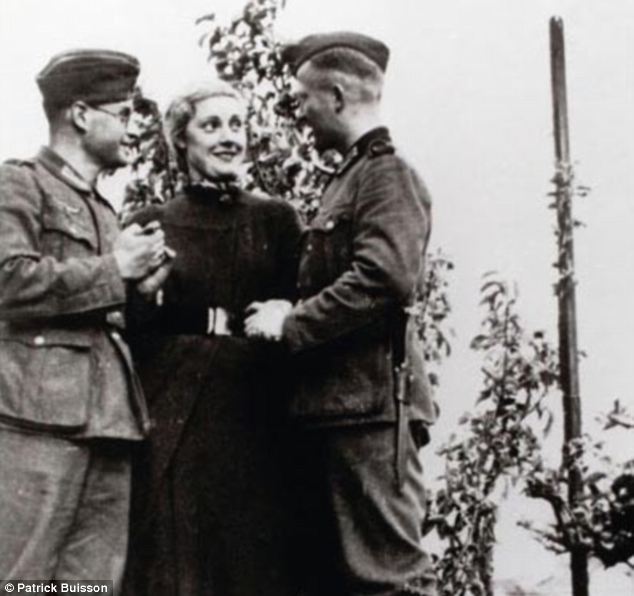 Murky past: The French struggle come to terms with the fact many women had intimate relationships with Nazi officers during the Second World War

He told the Sunday Times: ‘We’ve had a difficult time facing up to what is not the most glorious page in our history.

‘A lot of what we are taught is mythology. The reality is that people adapted to the occupation.’

The photographs for Mr Buisson’s book were mainly found at car-boot sales and flea markets across Germany having mainly been taken by Nazi soldiers during their time in France. 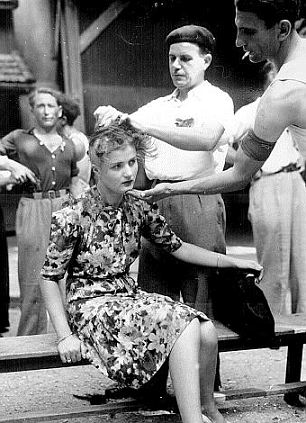 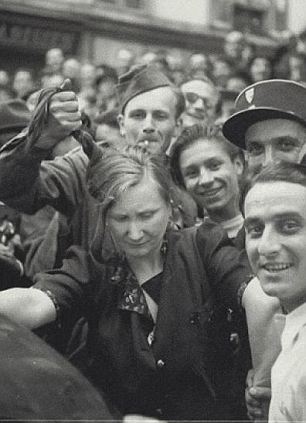 During an exhibition of similar images in Paris a few years ago, the deputy mayor of the city said he wanted to be sick on seeing the pictures of well-dressed citizens shopping next to a market piled high with fruit and veg, giving no inkling of the wartime hardship France usually likes to complain about.

There was also a theory that French prostitutes were the first rebels against the invaders by refusing to service their needs. However many of the photographs show soldiers cuddling with women in brothels and clubs

Nazi officers took over control of the brothels and expected them to have high standards of hygiene. 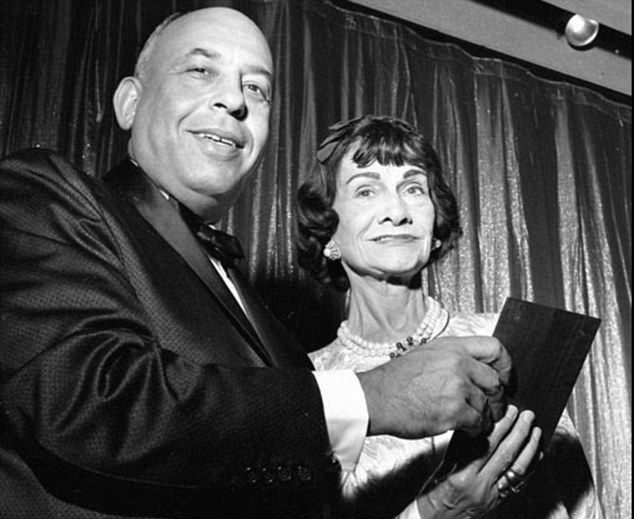 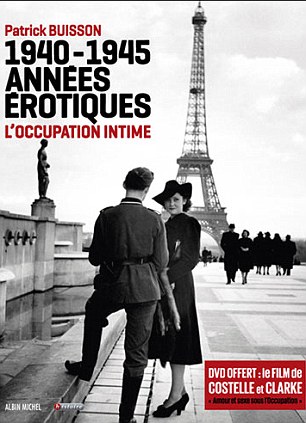 Perhaps the most high-profile of Franco-German affairs was between the designer Coco Chanel and the dashing 44-year-old German officer, Baron Hans Guenther von Dincklage.

It was von Dincklage who arranged that Chanel, then 57, stay at the Ritz to manage her business – even though she had closed her designer stores at the beginning of the regime change.

She was recently accused of having worked for German military intelligence during the war.

Chanel was one of many celebrated personalities, including the singers Edith Piaf and Maurice Chevalier, the writer Jean Cocteau and the late president Francois Mitterrand, who  remained in her native country following its occupation by German forces in the summer of 1940.

The aged Marshal Petain, who ran the Vichy government, was convicted of collaboration after the war.

He was originally sentenced to death for treason but this was changed to life imprisonment.

He was known to have shamelessly seduced younger staff during the war, while recommending the motto ‘work, family, country’ to the rest of the nation. 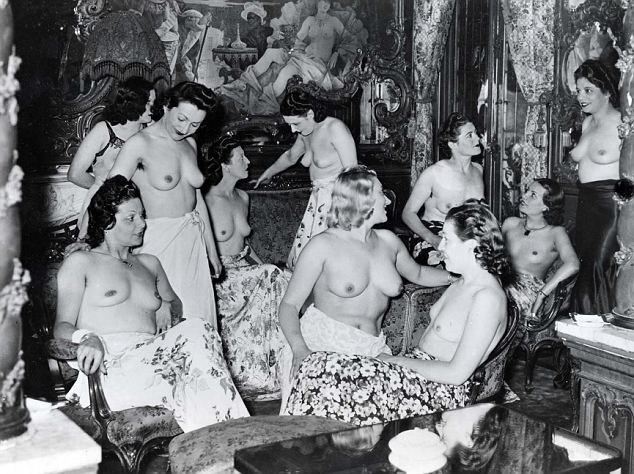 Famous picture – not in Patrick Buisson’s book – showing a brothel in Paris in wartime – one of many that flourished during the Nazi occupation: 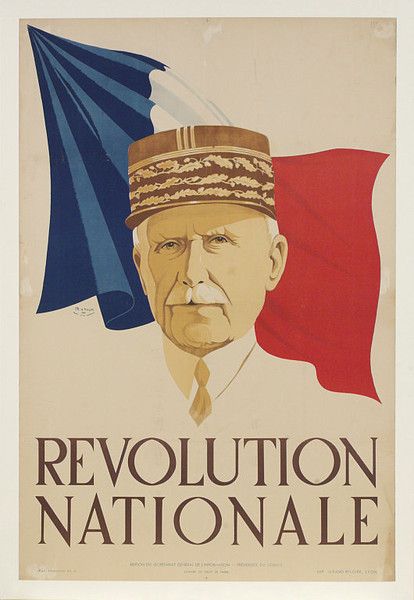 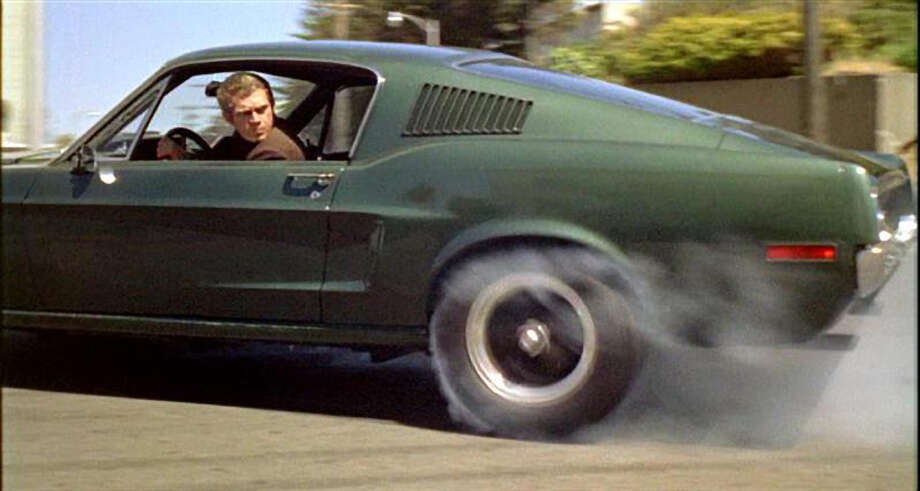