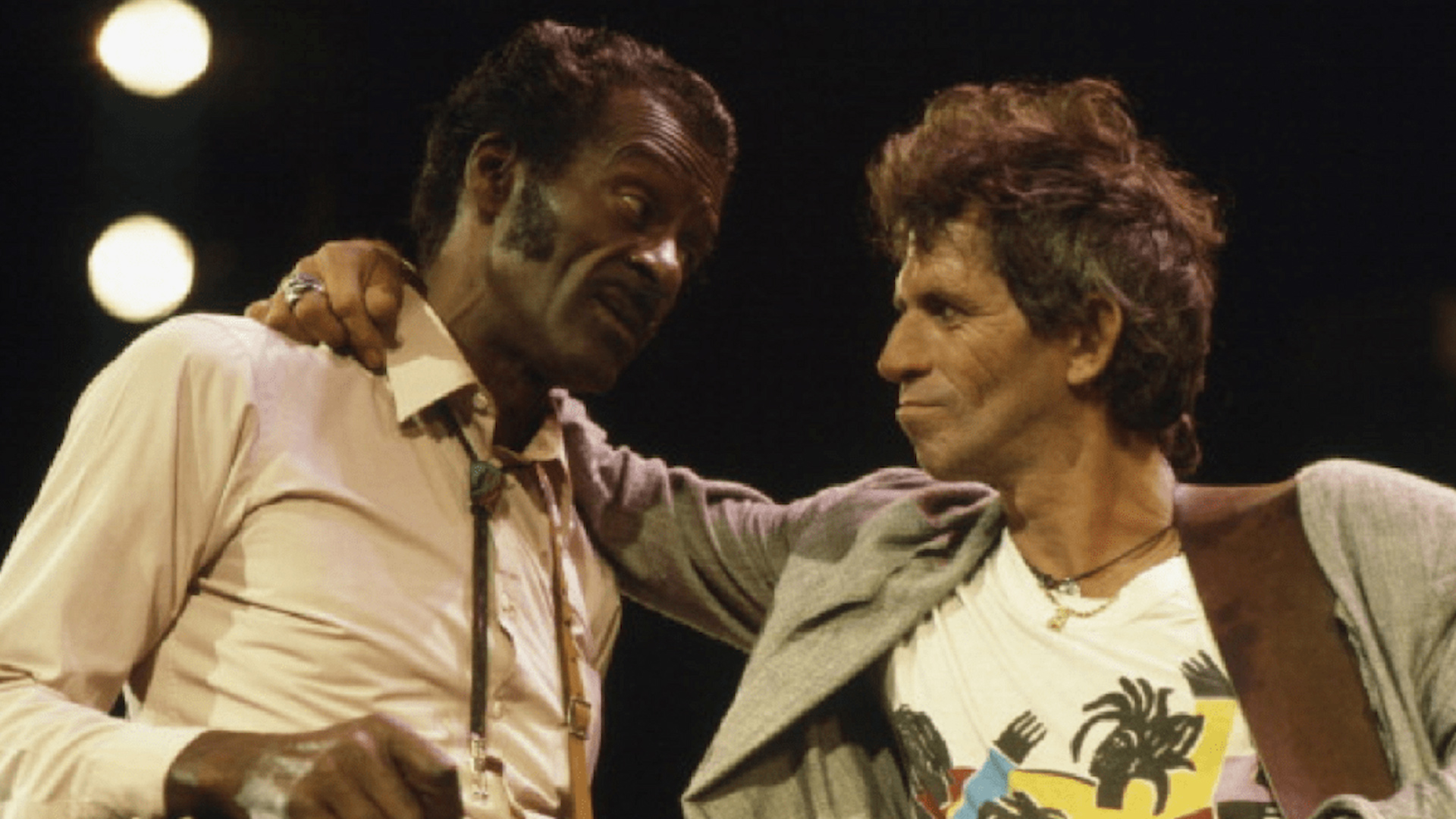 Chuck Berry’s music has transcended generations. He earns respect to this day because he is truly an entertainer. Berry, also known as “The Father of Rock & Roll,” gained success by watching the audience’s reaction and playing accordingly, putting his listeners’ amusement above all else. For this reason, tunes like “Johnny B. Goode,” “Maybellene” and “Memphis” have become anthems to an integrated American youth and popular culture. Berry is a musical icon who established rock and roll as a musical form and brought the worlds of black and white together in song. Born in St. Louis on October 18, 1926 Berry had many influences on his life that shaped his musical style. He emulated the smooth vocal clarity of his idol, Nat King Cole, while playing blues songs from bands like Muddy Waters. For his first stage performance, Berry chose to sing a Jay McShann song called “Confessin’ the Blues.” It was at his high school’s student musical performance, when the blues was well-liked but not considered appropriate for such an event. He got a thunderous applause for his daring choice, and from then on, Berry had to be onstage.

Berry took up the guitar after that, inspired by his partner in the school production. He found that if he learned rhythm changes and blues chords, he could play most of the popular songs on the radio at the time. His friend, Ira Harris, showed him techniques on the guitar that would become the foundation of Berry’s original sound. Then in 1952, he began playing guitar and singing in a club band whose song list ranged from blues to ballads to calypso to country. Berry was becoming an accomplished showman, incorporating gestures and facial expressions to go with the lyrics.

It was in 1953 that Chuck Berry joined the Sir John’s Trio (eventually renamed the Chuck Berry Combo), which played the popular Cosmopolitan Club in St. Louis. Country-western music was big at the time, so Berry decided to use some of the riffs and create his own unique hillbilly sound. The black audience thought he was crazy at first, but couldn’t resist trying to dance along with it. Since country was popular with white people, they began to come to the shows, and the audience was at some points almost 40 percent white. Berry’s stage show antics were getting attention, but the other band members did their parts as well. In his own words: “I would slur my strings to make a passage that Johnnie (Johnson) could not produce with piano keys but the answer would be so close that he would get a tremendous ovation. His answer would sound similar to some that Jerry Lee Lewis’s fingers later began to flay.”

Later in 1955, Berry went on a road trip to Chicago, where he chanced upon a club where his idol, Muddy Waters, was performing. He arrived late and only heard the last song, but when it was over he got the attention of Waters and asked him who to see about making a record. Waters replied, “Yeah, Leonard Chess. Yeah, Chess Records over on Forty-seventh and Cottage.” Berry went there on Monday and discovered it was a blues label where greats like Howlin’ Wolf and Bo Diddley recorded. He didn’t have any tapes to show, but Chess was willing to listen if he brought some back from St. Louis. So Berry went home and recorded some originals, including the would-be “Maybellene,” then called “Ida May,” and drove back to Chicago later that week to audition. Much to Berry’s surprise, it was that hillbilly number that caught Chess’ attention. Berry was signed to Chess Records and in the summer of 1955, “Maybellene” reached #5 on the Pop Charts and #1 on the R&B Charts. Through Chuck Berry, Chess Records moved from the R&B genre into the mainstream and Berry himself was on his way to stardom.

THE REST IS HISTORY

Berry continued his success with such hits as “Brown-Eyed Man,” “Too Much Monkey Business,” “Memphis,” “Roll Over, Beethoven!” and “Johnny B. Goode.” “Johnny B. Goode” is Berry’s masterpiece, as it brought together all the elements of Berry’s unique musical sound. It cemented his place in rock history and led to fame in the 1950s. His popularity garnered him television and movie appearances and he toured frequently.

Berry’s incredible success is due to his ability to articulate the concerns and attitudes of his audience in his music. At the height of his success, Berry was a 30-year-old black man singing to a mostly white, teenage audience. Dubbed the “Eternal Teenager,” Chuck Berry’s knowledge of the pop market made it possible for him to break color barriers and play to an integrated audience.

In the 1960s and 1970s, Berry’s music was the inspiration for such groups as the Beatles and the Rolling Stones. Berry had a number of comeback recordings and in 1972 had the first and only #1 Pop Chart hit of his career with “My Ding-A-Ling. 1986 fittingly saw him inducted into the Rock and Roll Hall of Fame as the very first inductee in history. As a tribute to his pervasiveness in the realm of rock, a clip of “Johnny B. Goode” was chosen played in the Voyager I spacecraft, proving Chuck Berry and his rock legacy are truly out of this world.