A movie tells a story, appropriately: 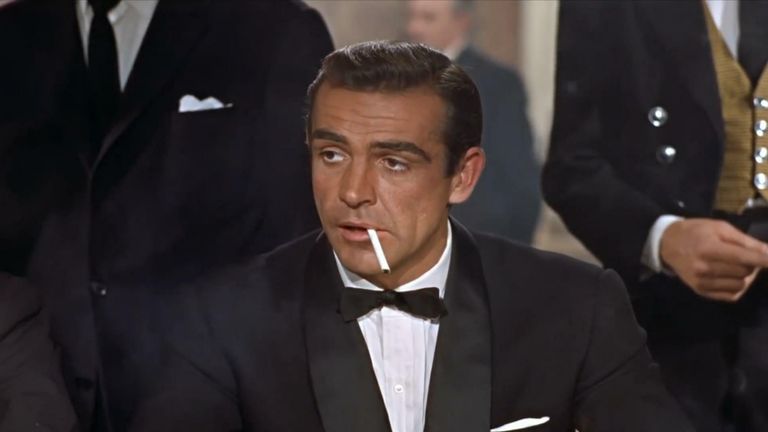 In his unmistakable Scottish brogue, Sir Sean Connery was the first man to utter film history’s most famous introduction.

The perfect combination of dangerous and suave, for many fans, he is the ultimate 007.

Connery was a jobbing actor when he was picked for Dr No in 1962, a role that set the man from humble beginnings on a path to becoming a Hollywood legend.

James Bond author Ian Fleming was initially resistant to the casting, describing him as an “overgrown stuntman” who was not refined enough for the role.Advertisement

However, he was later so impressed with his performance that he created a Scottish ancestry for the character in subsequent books.

Connery would become the British spy seven times in total, also starring in From Russia With Love, Thunderball, You Only Live Twice, Diamonds Are Forever, Never Say Never Again, and Goldfinger, arguably the greatest Bond film of all, in 1964.

His career in entertainment spanned seven decades, with smaller roles before Bond and films afterwards including The Rock, Highlander, The Untouchables and of course, Indiana Jones And The Last Crusade, in which he played Indy’s father, Professor Henry Jones.

However, it is his licence to kill that he will undoubtedly be best remembered for.

Thomas Sean Connery was born in Edinburgh’s Fountainbridge area on 25 August 1930. The elder of two boys, he left school at an early age and took his first job as a milkman, complete with horse-drawn cart.

He enlisted in the Royal Navy at 16, but was discharged on medical grounds three years later after suffering with a stomach ulcer.

Various jobs included a stint as a bricklayer, work as a lifeguard and sitting as an artist’s model for the Edinburgh College of Art. Under the name Thom Connery, he was placed third in the tall man’s division (he was 6ft 2in) of the 1950 Mr Universe contest.

Also a gifted footballer, his life could have turned out very differently, after he was offered a contract by former Manchester United manager Sir Matt Busby, who had seen him on the pitch during a friendly match.

But it was Bond that launched him to stardom five years later.

He quit the role after You Only Live Twice in 1967, saying he was frustrated by the repetitive plots, but was enticed back after successor George Lazenby failed to make the grade.

Connery’s big screen career took a dip after Bond, but was revived with The Untouchables in 1987, with his role as tough gang-busting Irish policeman Jim Malone winning him an Oscar for best supporting actor.

In 1989, the US magazine People voted him Sexiest Man Alive, to which the then 59-year-old replied: “Well, there aren’t many sexy dead men, are there?”

In 2000, he was knighted by the Queen – an honour said to have been delayed by his vocal support for the Scottish National Party (SNP) – and received the American Film Institute’s Lifetime Achievement Award in 2006.

Once voted the greatest living Scot, in 2009 he was awarded an honorary doctorate from Edinburgh Napier University for the achievements throughout his career.

The star never lost his much-imitated accent, despite his many years living abroad. From his home in the Bahamas, he remained a fervent supporter of independence for Scotland.

He had two tattoos – one reading “Mum and Dad” and another, “Scotland Forever”.

Connery is survived by his son Jason and his second wife, French artist Micheline Roquebrune, whom he married in 1975.