It was not altogether, or even principally, my fault that, having squandered the last of Nana’s money, I was consigned to a flea bag backwater federal ministry in Mr Reagan’s Second Government.
~~
Truth is, it’s all Wendy’s fault and she knows it too and Wendy will one day have to explain her behaviour to a Power Far Higher than myself..
~~
After all, it had been Wendy, in her mischievous, calculating, humour, who had first consigned me to the ministry noticing that I’d “Yet to get an occupation.”
~~
I’d lived until that time, in gai sans souci and considered that condition to be my allotted position in life. I’d never given any thought to having an occupation and the idea sounded unseemly to me.
~~
Yes, that’s it, unseemly.
~~
Nana would never have approved, I’m quite sure.

Nana took a very dim view of things such as occupations, associating such things as she did, quite rightly so, fit only for Democrats and other, highly suspect, social marginals.

Yet, Lady History records for us that, had I not been consigned to that dreary federal ministry, I would, very likely, never have seen the girl who would, one day, become your Mummy.

On a Monday morning, I looked up from the teeth-aching tedium of a ministerial document to see a girl in a green dress of a nondescript cut and fabric.

We went for dinner that night and I’ve never made so much as a sideways glance at another girl from that day to this and never will. 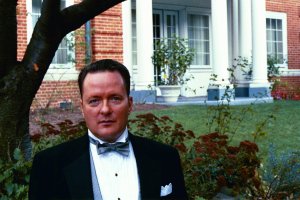