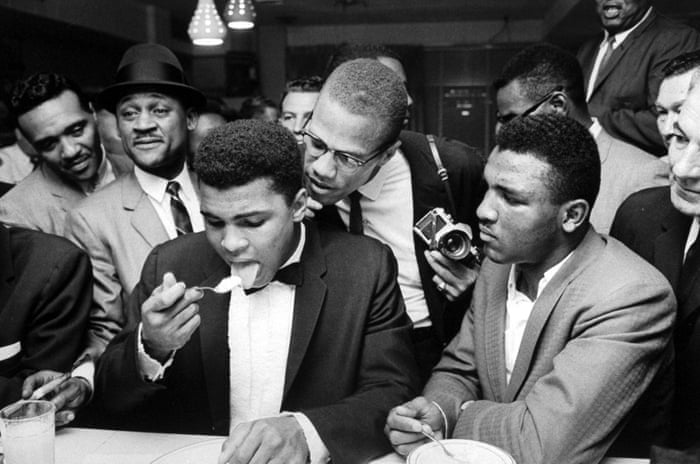 IT WAS the collision of sports, race, and politics. On June 10th 1962, Cassius Clay, an up-and-coming boxer, met Malcolm X, a Nation of Islam minister, in a Detroit luncheonette. According to Randy Roberts and Johnny Smith, two historians who have written the story of their lives together, this meeting felt preordained. Clay, later to become Muhammad Ali, grew up in a segregated Louisville, Kentucky, and was taught to avoid the violence that awaited those who tried to integrate—though he excelled at one of the world’s most violent sports. Malcolm X too had an intimate history with violence, having lost his father under suspicious circumstances during childhood. But it wasn’t just their early introduction to violence in America that helped them forge a bond. They were also two of the most outspoken and articulate black voices of the 1960s, drawn together by their desire for not only spiritual fulfilment, but also survival. Though their individual lives have been explored through previous books and movies, “Blood Brothers: The Fatal Friendship between Muhammad Ali and Malcolm X” delves into the close kinship these men shared, and the reasons it ultimately fell apart.

Q: What was the impetus behind this book?

Randy Roberts: There’s always a tendency to glamorise the lives of historical figures; and today we have the myth of Malcolm X and the myth of Muhammad Ali. It’s almost as if the hard edges have been sanded down over the years. And now we have very smooth and comfortable images of both of them. But those were very uncomfortable times, and the truth is more important than the glossy, patina-covered image of their lives. So our focus in this book is to examine them within the context of the times. We’re not saying they’re not great people or didn’t do great things. But they didn’t know which way the wind was going. They didn’t know what their lives were going to look like. They were taking chances, making mistakes, and trying to get by with the best evidence they had at the time. It’s easy to see what was the best choice in the light of history. But it’s more difficult at the moment. So rather than follow the myth, we went to the sources to see what actually happened in the lives of these two men. We wanted to understand the options that were in front of them and the reasons they made certain choices.

Q: Your book draws on some interesting similarities in their early lives that you suggest had a profound impact on their years together.

Absolutely. Like many African American men during that time, they saw lots of violence. Malcolm’s father was killed, though the circumstances are still unclear. He was always looking for a father figure and he understood that life for African American men was unfair. For example, he originally wanted to be a lawyer but was told by his teachers that it was impossible for African Americans and he should think of something else. Meanwhile, Ali’s father was present, but had a deep sense of anger that he couldn’t realise his full potential. You have to understand that Ali’s father was a talented man with a beautiful voice and a talent for the arts. Had he been white, one could easily imagine that his life would have been dramatically different.

Bear in mind, these were their early years during which they also heard horrific stories, such as the killing of Emmett Till—the 14 year-old African American boy who was lynched for allegedly whistling at a white woman. The net result was that they saw nothing good from the integration movement, as they had a profound understanding the violent world that awaits.

Q: What surprised you most about their lives?

The most shocking aspect of Ali’s story is how he deserted Malcolm X and followed the Nation of Islam’s supreme leader Elijah Muhammad. It’s important to realise that Ali and Malcolm were as close as brothers. Yet when Malcolm was expelled from the Nation of Islam, Ali also said that anyone who betrays Elijah Muhammad deserves to die. There was coldness in his public statements around this time. Today, we see Ali as someone who is committed to peace and brotherhood. And he is a wonderful person. But we do a disservice to him by not understanding his world and how he changed. He wasn’t always the person we see today, who corporate sponsors want to use to help sell products.

We can also see that Malcolm was someone who going through a transition. He was older and wiser, but was in deep trouble with the Nation of Islam. Further, he had seen what happened to people who opposed the Nation of Islam. During this time, he’s trying to figure out how he can stay alive. By his calculation, he could ensure his survival by bringing Ali to the Nation of Islam. In a sense, they were using each other, though they loved each other deeply. I guess what I’m trying to say is that life can be really complicated and messy. What’s more, they were playing for high stakes during the early 1960s, which was one of the most polarising times in American history.

Q: How would you characterise their relationship with the civil-rights movement during this time?

Q: Can you talk about the dichotomy between Ali’s principles and his survival instincts?

You have to understand that Ali’s opposition to the draft was never based on principle. He was not known for speaking out against the Vietnam War, at least not until it was his time to be drafted. His sense of fear was further exacerbated by fellow members of the Nation of Islam, who convinced him that he would be killed if he joined the military. Remember, he was raised in fear. Based on our interviews with Ali’s childhood friends, his parents always cautioned him about straying from their segregated neighbourhood. And they were particularly concerned about Ali and his brother getting arrested because anything could happen at that point—and there was nothing his parents could do. Oddly enough, he didn’t event want to participate in violent sports. He was a good boxer because he didn’t want to get hit.

Q: Can you help explain how someone who avoided violence became one of the greatest boxers of all time?

There was an odd set of circumstances. Louisville had this local television program—Tomorrow’s Champions—that featured young, amateur boxers. Two things happened: At 12 or 13 years old, he goes into a gym and discovers that he’s very good at boxing. He’s not just good, but excellent. The second thing is that he gets notoriety for being on television. He’s not a good student, but becomes this celebrity who eventually goes off to Rome to compete in the Olympics. It was a violent sport—but look at the rewards. And once you become this successful, who would throw this all away?

Q: There are some uncomfortable realities exposed in your book. What were the biggest challenges in piecing together their lives? Were people forthcoming?

There was actually a willingness to talk to us because we’re historians. But the biggest challenge involved investigating their private moments. Ali knew that his relationship with Malcolm could undo his boxing career. So how do you understand the inner sanctum of their lives? As it turns out, FBI reports—which were based on insights from confidential informers during that period—were central to our research. However, we still faced the challenge of uncovering what was said between them when they were alone. There were no letters or recorded conversations. So we had to piece together the story from all different sources.

Q: What do you hope readers get from this book?

When people look at Muhammad Ali, most people look at him around the draft, and he becomes an icon. But I want people to better understand the creation of “Muhammad Ali” and how he made this transition into the legend his is today. 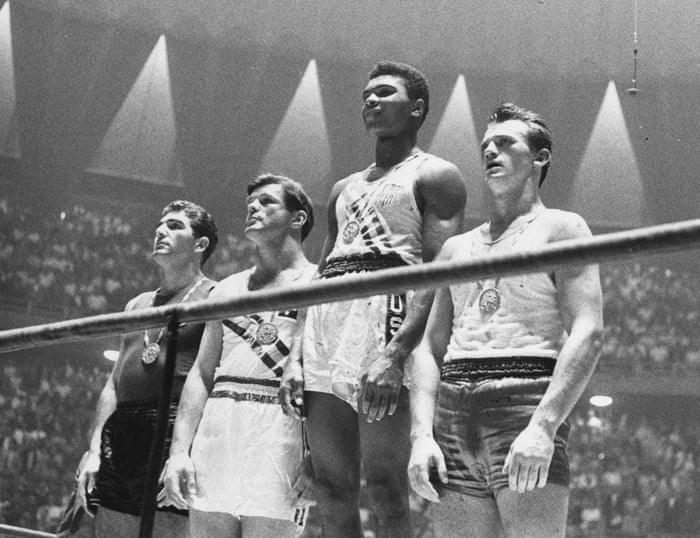